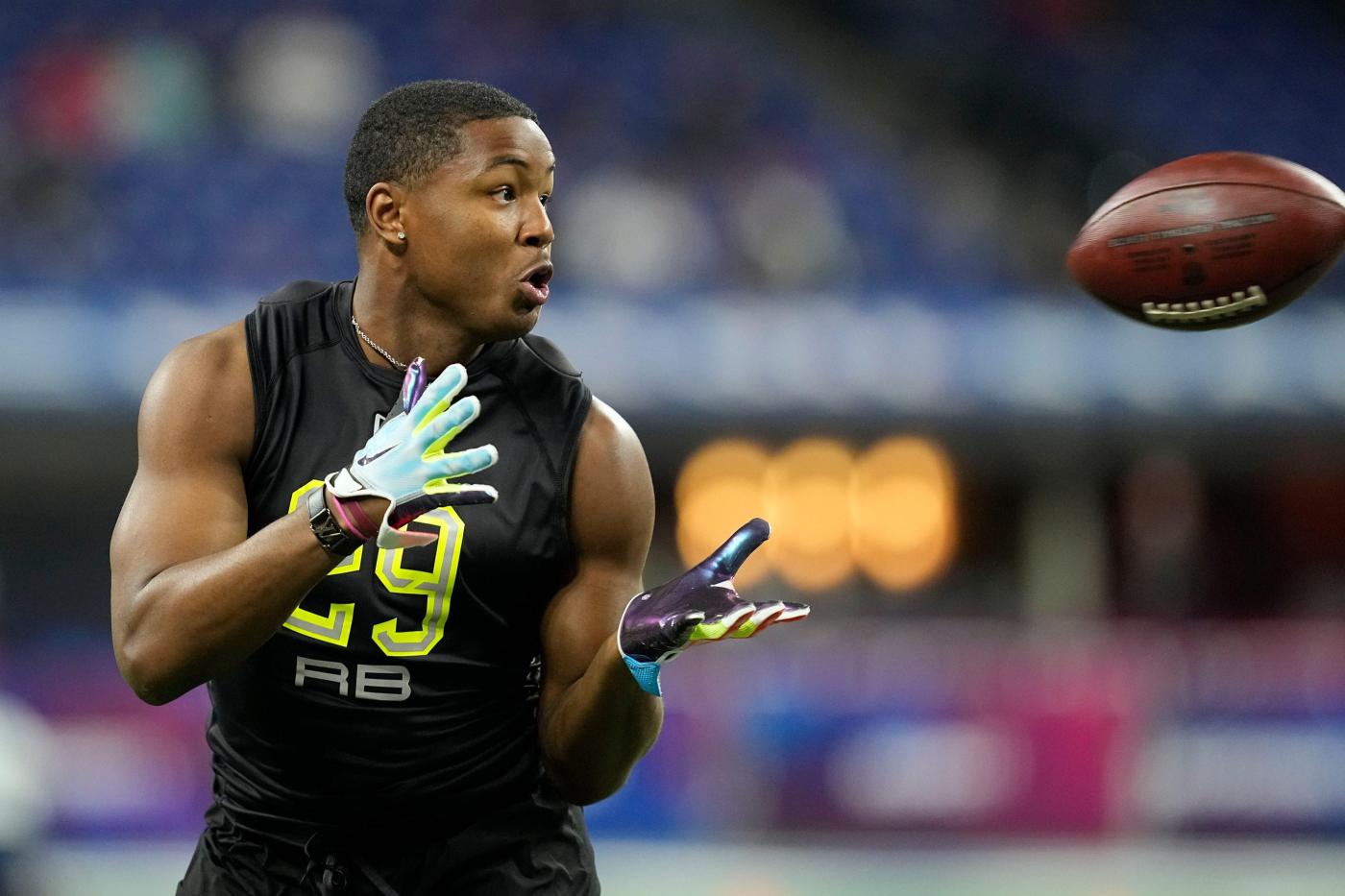 Miami Dolphins general manager Chris Grier has made more draft and offseason trades in his four years at the helm than any other NFL executive, but on Friday his phone was silent.

“We got no calls from teams trying to move down,” Grier said, referring the lack of interest in the Dolphins’ 102nd pick, which Miami used to select Georgia linebacker Channing Tindall. “[Team owner] Steve [Ross] was talking about this [being] the first time our phone didn’t ring.”

The Dolphins hoped to use their third-round selection to move down, potentially picking up more than their three selections on the third and final day of the draft on Saturday, but had no success. Saturday could bring some movement if teams gain interest in the Dolphins’ 125th pick in the fourth round, but its more realistic that Miami will have to make the best out of the two seventh-round selections they have.

Here’s a look at the best prospects still available after the first three rounds of the 2022 NFL draft:

Spiller, who has the ideal combination of size, instincts, and quick feet, gained 2,993 rushing yards and scored 26 touchdowns in his three seasons at Texas A&M. Despite his 74 receptions, his hands were inconsistent and he’s a step slow in pass protection.

Tom played center before spending his final two seasons as Wake Forest’ left tackle. He’s athletic, fast and mobile enough to be an effective reach blocker for an outside-zone scheme, which is what the Dolphins intend to run. But at 6-foot-4, 295 pounds he’s a tad undersized.

Likely is a well-coordinated athlete who has the potential to become a dangerous seam threat playmaker in the right offense. Last season he caught 59 passes for 912 yards and scored 12 touchdowns, but there should be some concern about the level of competition he’s faced. He’s undersized (6-4, 245) for his position, but is a willing blocker.

While Kinnard was a tackle in college, his massive size (6-5, 340) and power indicates that he’d be better at guard in the NFL. He’ll appeal to offenses looking to establish a physical tone.

Winfrey is probably best suited to be a 3-4 end because of his size (6-3, 295) and frame. He has an explosive first step, which has helped him contributed 13 sacks in his three seasons. But he’s easily moved in the run game.

This Australian import is a work in progress because of his limited experience playing football. But he’s massive (6-8, 380) and is an unstoppable force in the run game. He’s also athletic enough to climb to the second level.

Peevy was a two-year starter with size, length and power at the point of attack to create some movement in the trenches. Despite his impressive 6-foot-5, 308-pound frame he’s able to get under the pad level of opposing offensive linemen. The biggest concern is that he ended up on the ground too many snaps per game.

Hoffman, a former Coastal Carolina standout who finished his college career at Virginia Tech, uses leverage and a wide base (he’s 6-3, 310 pounds) to manufacture power to anchor. He can climb to the second level and would be an effective puller in a season or two with the right kind of development.

Williams, who is 6-foot-4, 252 pounds, has an explosive first step and the athleticism needed to finish plays. He has the physical tools — length, frame, and balance — to effectively set the edge. His lateral quickness likely ensures he’ll be drafted, but he’s got a DWI charge and a second-degree domestic assault charge, which he took a lesser plea to, that teams need to thoroughly investigate.

Clark is a large (6-3, 245) well-proportioned linebacker whose length and speed help him in coverage. He has an aggressive temperament, and his effort is never lacking. While he was highly productive (135 tackles, 5.5 sacks and one interception) in his final season at LSU there’s still room for growth and improvement.

McCollum, a five-year starter for an FCS program, is a ballhawk (13 interceptions) who has a good combination of size (6-2, 200) and speed (4.33 in the 40-yard dash). He’s instinctive, possesses phenomenal ball skills, and catches the ball at its highest point. He’s also physical against the run. His biggest challenge will be adjusting to wideouts who match his size, speed and athleticism.

Howell’s 3,056 yards passing and 24 touchdowns in 2021 can actually be considered a down year after he threw for 3,500 or more yards and 30-plus touchdowns each of his first two seasons. That was a byproduct of losing receiver Dyami Brown and the big running game he had with backs Javonte Williams and Michael Carter. But Howell has the talent to become an NFL starter, and might be the sleeper in this draft.

Ferguson is a reliable, sure-handed target who could use some refining in his route running and in-line blocking. He’s caught 145 passes for 1,618 yards and 13 touchdowns in the 47 games he’s played the past four seasons. He’s got soft hands, and has the talent to be more than a get-in-the-way blocker for the right scheme.

Anyone nicknamed the “Punt God,” has to be dynamic, and Araiza certainly is. He possesses elite power in his leg and the ability to flip fields, which could make him the highest-drafted punter since Todd Sauerbrun was taken 56th overall in 1995. Most NFL insiders expect he’ll be taken by the conclusion of the fourth round, and could immediately become a top-10 punter in the NFL.

Strong’s last name accurately described his arm, which puts him in the running for best arm of all this draft classes’ quarterbacks. But he’s limited to playing from the pocket and doesn’t have elite processing skills.

White was the thunder in the Bulldogs thunder-and-lightning backfield, which he shared with James Cook, who was selected by the Buffalo Bills. He’s a big, violent runner who has the ability to work his way through traffic.

Armour-Davis is a bit of an unknown, because he’s only started for one season at Alabama, but his physical traits are impressive. He’s aggressive in run support, and is a physical tackler. Teams need to work through his medical history to feel comfortable about where he should be selected.

Rambo’s speed and explosiveness guarantees him an opportunity to make an NFL roster because he’s a big-play producer. While he made acrobatic catches throughout his college career, he has issues when things get physical at the catch point.

Price’s traits and football makeup outshine the production (2,203 rushing yards, 6.0 yards per carry and 16 touchdowns in 49 games over five seasons) he had for the Panthers. His size (6-1, 210), speed (4.38 in the 40-yard dash) and knack for producing big runs will motivate a team to take him in the late rounds. Put him into the right scheme, and behind a stout offensive line and he could become a 1,000-yard rusher.

Kelley, a transfer from Arkansas, has a sudden release and attacks all areas of the field. He put up ridiculous numbers feasting on lower-level competition, but was impressive in postseason practices and games. He’s also athletic enough to move the chains with his legs, and delivered at least one rushing touchdown in 10 of 13 games last season.