Paramedics huddled together in the ambulance Natalie Pascus worked most from.

But on this trip through Parksville, it would carry her ashes.

The paramedic’s ambulance was one in a long line of emergency vehicles that paraded through the mid-Island city honouring a lady who friends said, lived to be a lifesaver and whose sudden death has left her community in shock.

“She’s left a hole in everybody’s heart,” said longtime friend and BC Ambulance Service paramedic Jen Hicks. “She lived for her family and we were her family so it just trickled, her compassion, her kindness.”

On Saturday, hundreds of emergency workers gathered in Parksville to pay tribute to the 54-year-old they worked alongside — including RCMP and firefighters to fellow paramedics.

“It would kill her to let a car go down not staffed so she would work on her days off and she was just that person,” said Robbie Jai, a longtime friend and fellow BC Ambulance Service paramedic.

“I was honoured to learn to help the people with Natalie. I was her driver, her helper for all these adventures that she did,” said John McKinstry, a longtime friend and retired BC Ambulance Service paramedic.

The devoted animal lover’s rescue dogs, Mack and Harlow walked with the honour guard into Pascus’ celebration of life, where they met up with her grieving daughter Mary.

“This is a woman who took homeless people into her home to make sure they had a safe place to be, a warm shower,” said Hicks.

Pascus died suddenly, from an undiagnosed heart condition on March 26th and it came as a shock to everyone who knew her because she was so healthy she was preparing to give a senior a new lease on life.

“She just said ‘I have to do this to help them.’” said McKinstry.

“Everyone should live like her. Give, care for others,” said Hicks. 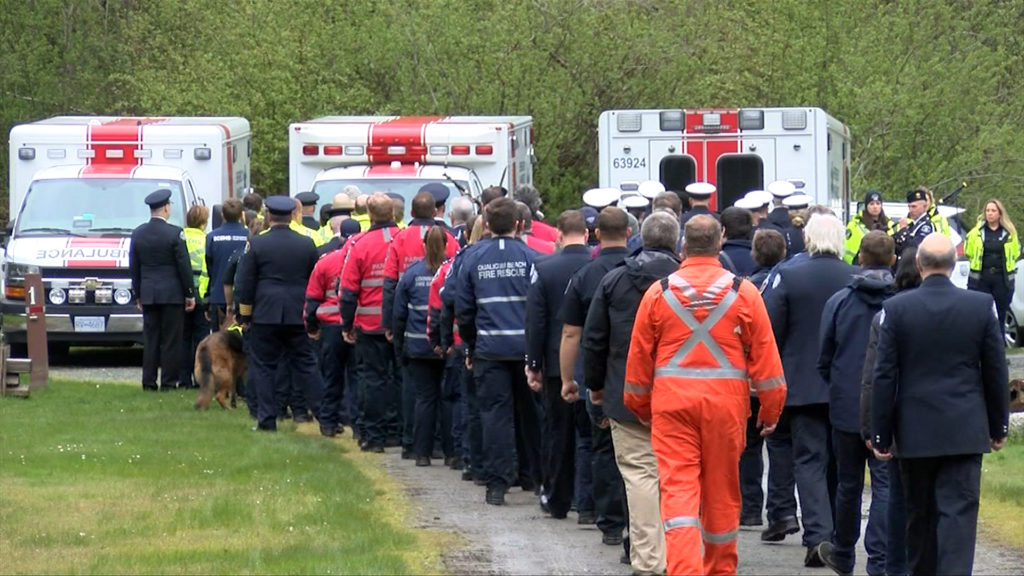