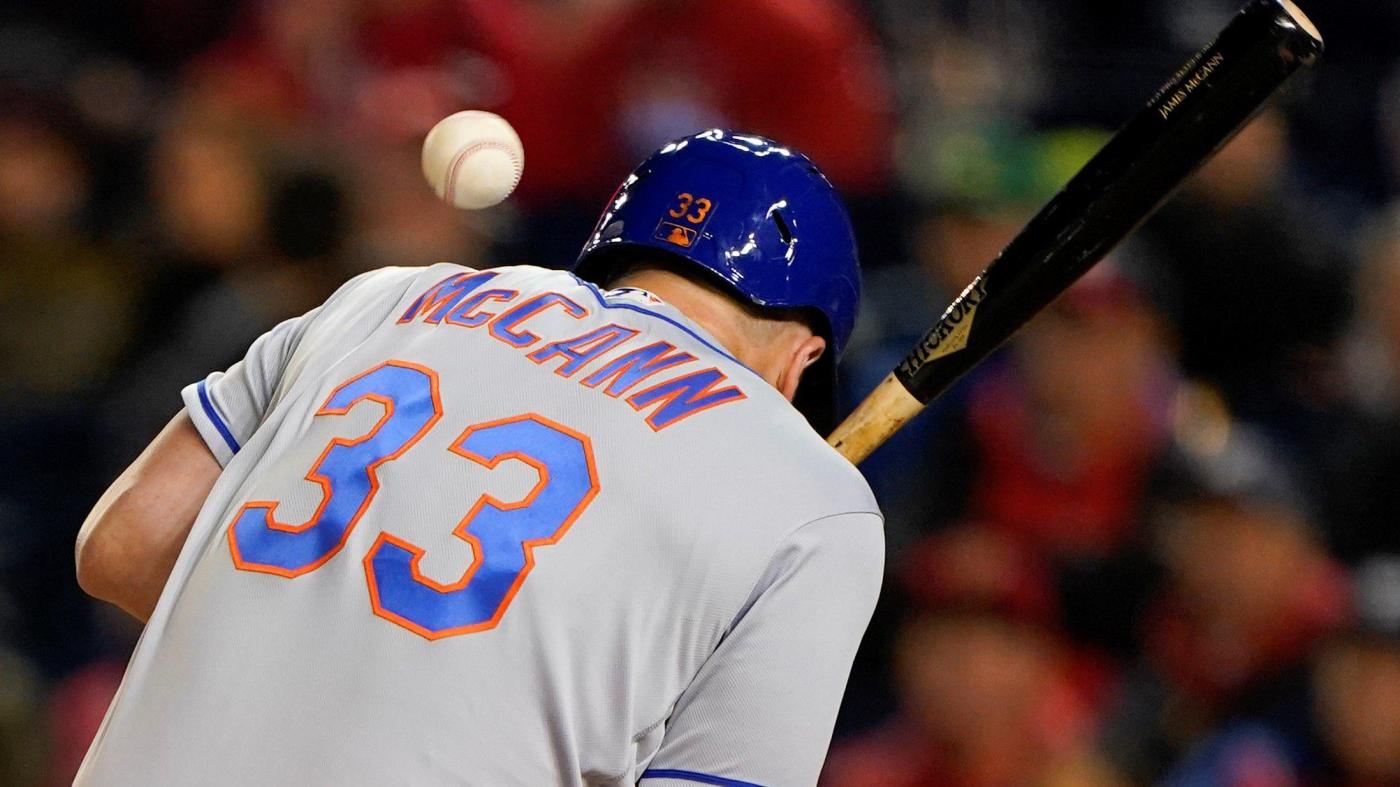 The Mets have been hit by pitches more often than any other team in the league.

You probably knew that already.

What you might not have known is that the next closest team, the Colorado Rockies, are closer to the teams tied for 22nd place than they are to the first place Mets. Entering Wednesday’s games, the Mets have been drilled 18 times, with Colorado at a much less painful 11. One team, the apparently force field-protected Pittsburgh Pirates, have not been hit by any pitches yet.

In Tuesday’s game against the Cardinals, the Mets were beaned three times, including one that got Pete Alonso in the helmet for the second time this season. Francisco Lindor took one to the face earlier in the year that cracked a tooth, and Dom Smith and Starling Marte each wore one on Tuesday in St. Louis as well.

Somehow, someway, the Mets have been hit 18 times in their first 19 games.

Starting pitcher Chris Bassitt, who himself hit a batter on Tuesday night, did not hold back when asked about this growing epidemic.

With pitchers throwing harder than ever, this is undoubtedly a problem that Major League Baseball needs to address. Catcher James McCann has advocated for a sit-down meeting between pitchers and MLB officials to come up with a league-approved substance that can help with grip enhancement. Whatever comes from these bizarre, almost magnetic forces that are causing the Mets to get plunked so often, the numbers are too staggering right now to ignore.

Through these first 19 games, the Mets have taken 734 plate appearances. Eighteen of those have ended with one of their hitters nursing a fresh Rawlings tattoo, meaning that 2.4% of their total trips to the plate have resulted in a hit by pitch. In 2021, the league average was 1.1%, and as recently as 2017, the number was less than 1%.

At present, the Mets are on pace to get hit by 153 pitches over 162 games. That would shatter the record set by last year’s Cincinnati Reds, who endured 105 HBP’s. Interestingly, the two teams who have been hit by the most pitches since MLB integrated are both from last season. Right behind the 2021 Reds are the 2021 Dodgers, who were pegged 104 times. Five of the 12 most-hit teams in the integration era (including the Mets) are from 2021, the year in which MLB cracked down on pitchers’ foreign substance use midseason.

On the individual level, seven different Mets have taken one for the team this year, and five of them (Alonso, Marte, Smith, McCann and Mark Canha) have already done so multiple times. No other team has more than three players that have been hit multiple times already. Alonso and Marte are tied for the league lead with Anthony Rizzo, a notorious plate crowder who leads all active players in hit by pitches by a wide margin. Second on that list just so happens to be Marte, who’s been hit by roughly 13 pitches a year since debuting in 2011. At this current pace, if Marte plays in even 140 games, he’ll have 32 baseball-sized bruises by the time the season is over, easily topping his career-high of 24.

The modern record for hit by pitches in a season belongs to Ron Hunt, an infielder for the 1971 Expos who led the National League in hit by pitches each year from 1968 to 1974. Hunt was hit 50 times in ‘71. Alonso and Marte will have some work to do if they want to match that, but both can easily top the Mets’ record held by their current teammate.

In 2018, Brandon Nimmo had 22 pitches run too far inside on him. Jeff McNeil fell one bean ball short of tying Nimmo’s record a year later. At their current rates, Alonso and Marte could both reach 23 by early August.

Maybe there will be some sort of accepted grip material in place before the end of the season, ensuring that this doesn’t get too out of hand. A large part of these sky high numbers can also be chalked up to flukish luck, though each subsequent pitch that hits a Met will invite more and more questions about intentionality.

What cannot be disputed is that the Mets have been hit by nearly a pitch per game. The 2019 Mets rank eighth in modern history with 95 hit by pitches. If things continue at this dangerous clip, the fellas from 2022 will look back on the 2019 team and wonder why they had it so easy.