Blake Shelton pays tribute to wife Gwen Stefani as he wishes her a happy 53rd birthday: ‘I love you so much’

By Ashleigh Gray For Dailymail.Com

Blake Shelton gushed over his wife of more than a year, Gwen Stefani, on her 53rd birthday.

The country crooner, 46, shared a TikTok video with threaded clips of them together, soundtracked by their duet Nobody But You.

He wrote over it, ‘Happy birthday to my beautiful wife @gwenstefani!! I love you so freakin much!!’ 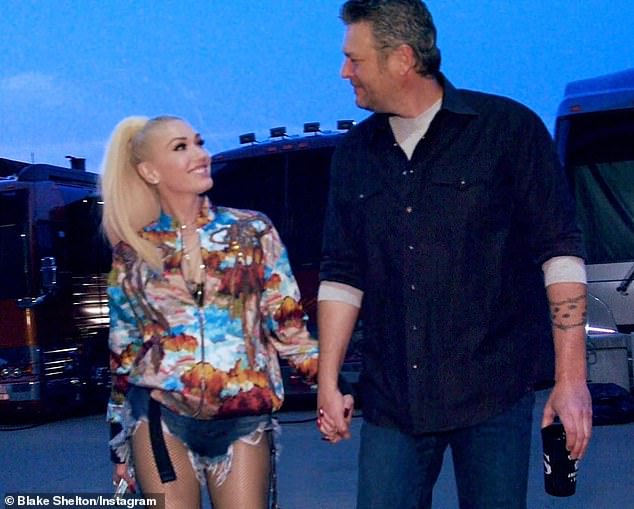 In love: Blake Shelton gushed over his wife of more than a year, Gwen Stefani, on her 53rd birthday

The footage showed the lovebirds behind-the-scenes as they walked around backstage at a show.

They held hands, with Blake in an indigo blue shirt and Stefani in cutoff denim shorts as they stared into each other’s eyes.

Other snippets showed the couple singing their co-written love song together onstage to a full audience.

One portion of the upload also showed the twosome sharing a smooch, and in the caption Shelton used the hashtag ‘#nobodybutyou.’

Gushing: He wrote in a TikTok, ‘Happy birthday to my beautiful wife @gwenstefani!! I love you so freakin much’

Blake and Gwen found love in each other while working on The Voice, after they’d both gone through painful divorces.

The No Doubt frontwoman was married to Gavin Rossdale for 14 years before they split, and the Oklahoma-bred music artist was married to Miranda Lambert from 2011-2015.

Gwen filed for divorce from Rossdale in August 2015, and by February 2016 she made her first red carpet appearance with Blake as a couple. 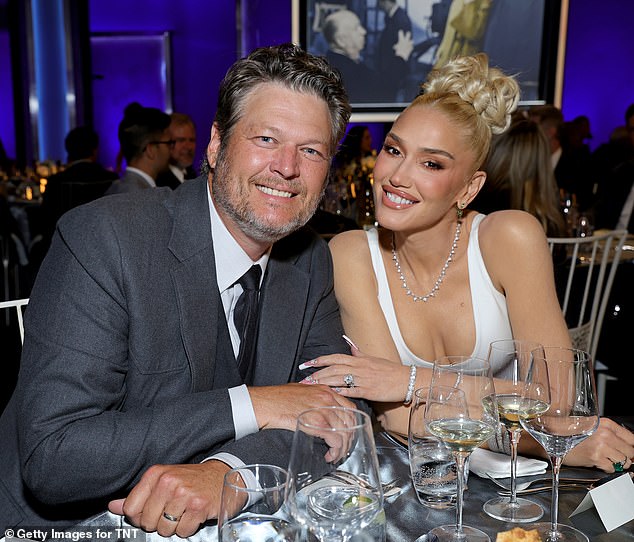 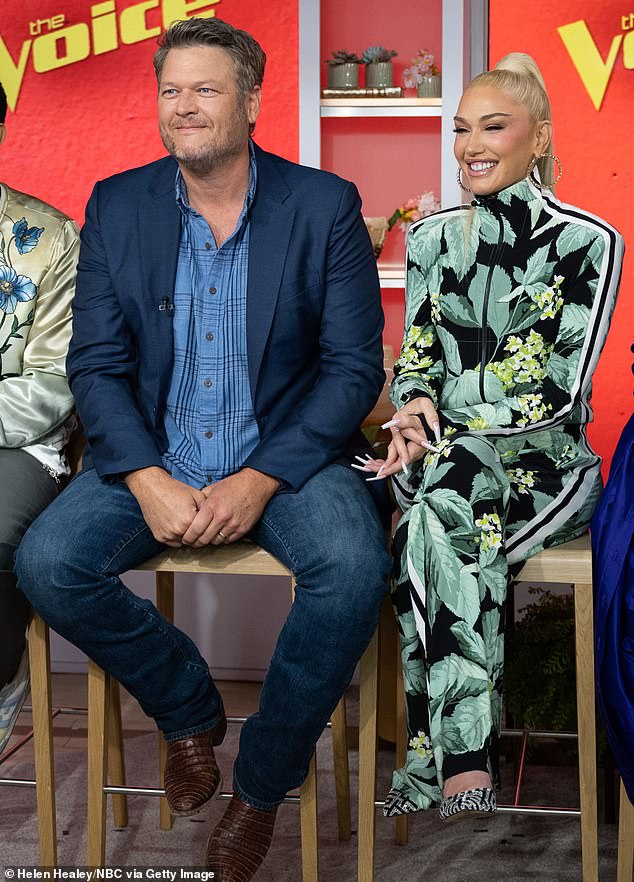 Sweet: Blake and Gwen found love in each other while working on The Voice, after they’d both gone through painful divorces

While appearing on The Kelly Clarkson Show the blonde bombshell reminisced on the special moment in their relationship.

‘That was my first public date with Blake Shelton,’ she revealed to the audience, adding, ‘It was the Oscars Vanity Fair party. I think I played at the party and then we went out that night.’

To make it even more special, the Anaheim-bred songstress admitted that Shelton ‘never does red carpets’ but made an exception for her.

‘Always that, like, melts me when I see it because it’s such a moment for me,’ Stefani said as she got emotional. 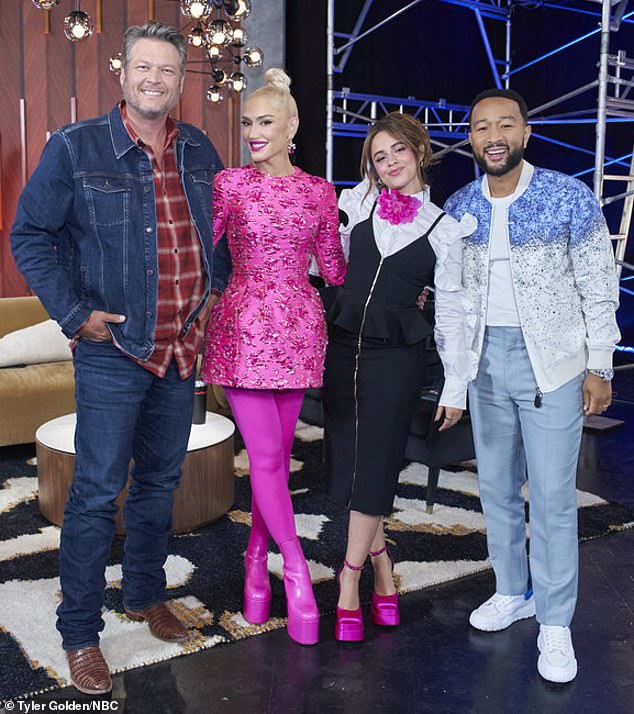 Work and play: The spouses continue to work alongside each other on NBC’s The Voice, sharing professional and personal lives

The happy pair regularly pen affectionate tributes to each other on social media as they mark various occasions.

On their one-year wedding anniversary Shelton posted a photo from their wedding day and wrote, ‘Happy anniversary to the woman that makes my world go round.. @gwenstefani, because of you, this year has been the best year of my life. I love you!!!! Thank you for saying yes!’

And on Father’s Day Gwen wrote to her beau, ‘happy father’s day @blakeshelton we all love u sooooo much god really gave me you for the ups and downs.’

Shelton is stepdad to her three sons with ex husband Gavin – Kingston, 16, Zuma, 14, and Apollo, eight. 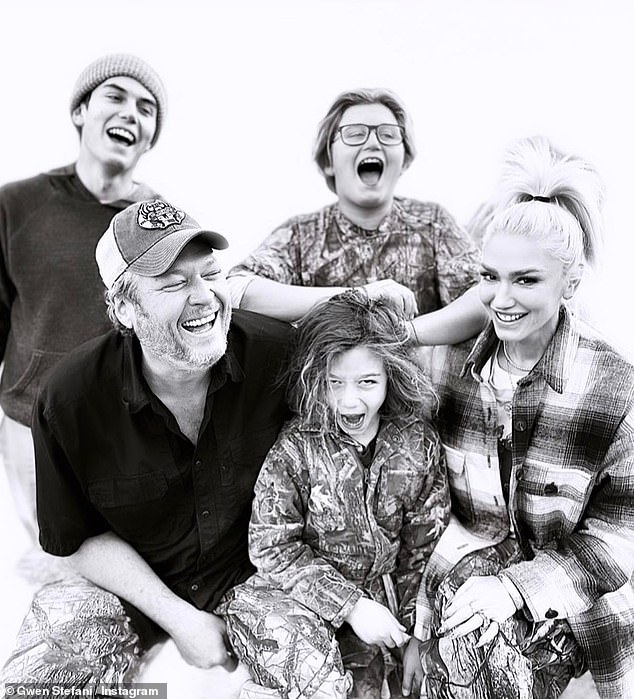 Stepdad: Blake has taken to Gwen’s three sons, Kingston, Zuma, and Apollo, whom she shares with ex husband Gavin Rossdale 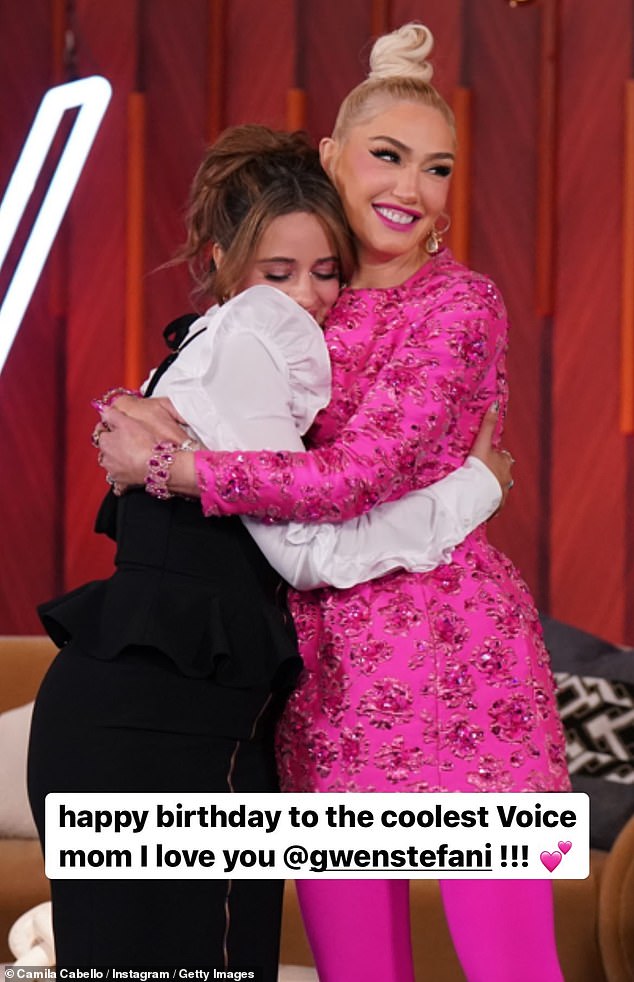