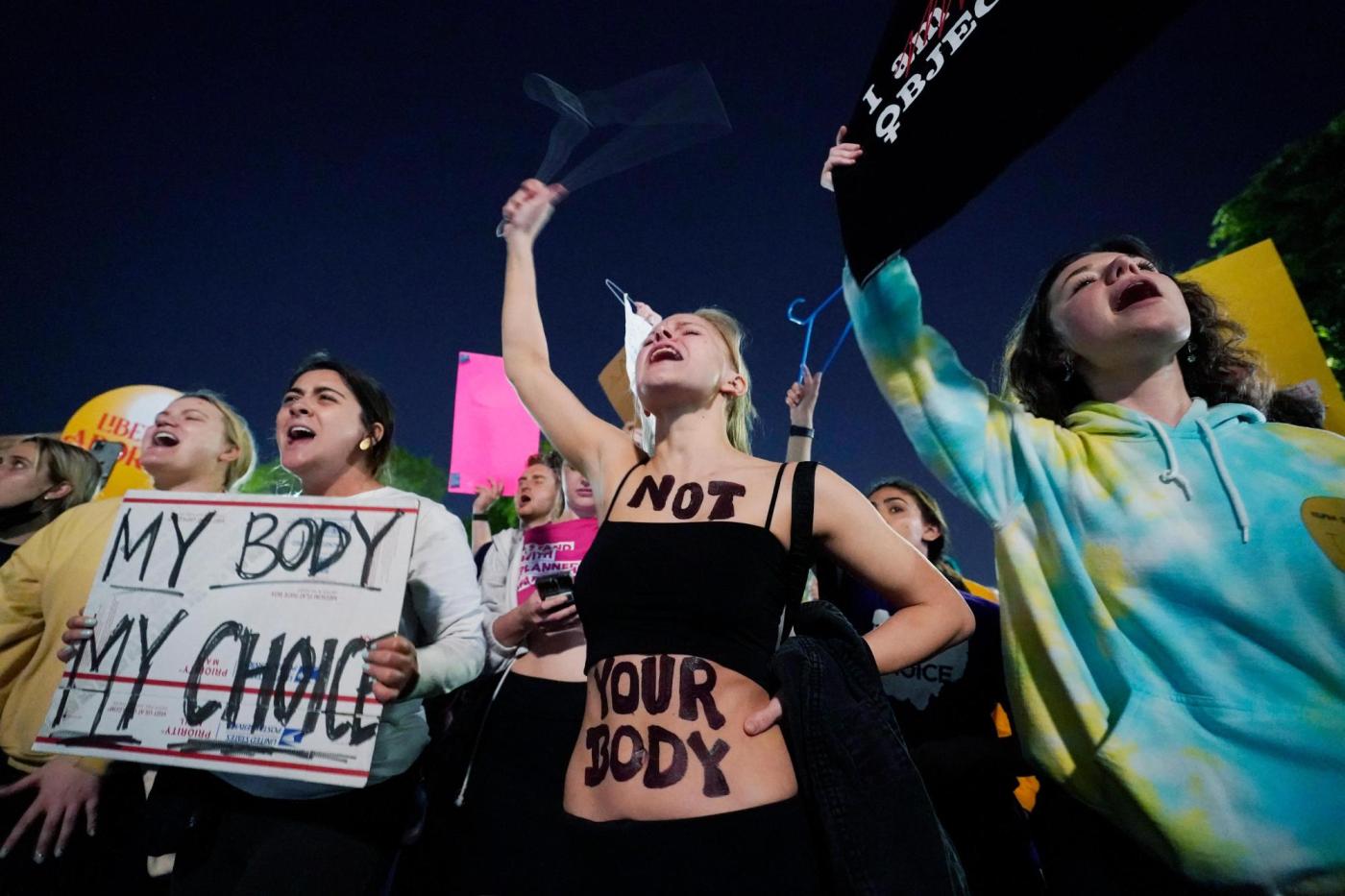 “It concerns me a great deal that after 50 years we’re going to decide that a woman doesn’t have the right to choose,” Biden told reporters before boarding Air Force One for a trip to Alabama.

If the decision is issued, he said, “a whole range of rights” that are based on the presumption of privacy will be in question, including access to contraception and same sex marriage.

Biden said he wanted Congress to pass legislation codifying Roe v. Wade, but he wasn’t prepared to say whether the Senate should sidestep the filibuster to do so.

KEY DEVELOPMENTS IN THE ABORTION STORY:

— Several state abortion bans would kick in if Roe v. Wade is overturned

— News of the draft opinion reverberated in Michigan, which has a pre-Roe abortion ban

Chief Justice John Roberts on Tuesday confirmed the authenticity of a leaked draft opinion suggesting the Supreme Court may be be poised to overturn the landmark 1973 Roe v. Wade case that legalized abortion nationwide.

Roberts also ordered an investigation into what he called an “egregious breach of trust.”

In the high court’s first public comment since the draft was published late Monday, Roberts said, “Although the document described in yesterday’s reports is authentic, it does not represent a decision by the Court or the final position of any member on the issues in the case.”

“To the extent this betrayal of the confidences of the Court was intended to undermine the integrity of our operations, it will not succeed,” he said in a written statement.

He added: “I have directed the Marshal of the Court to launch an investigation into the source of the leak.”

WASHINGTON — U.S. Health Secretary Xavier Becerra said Tuesday that women should be able to make their own decisions about their bodies.

“That’s their right,” Becerra said in a statement.

Becerra noted that abortion remains a legal medical procedure, and as such, is a health care service.

“I strongly believe in protecting and promoting access to health care, and that includes safe and legal abortion care,” he said.

By law, federal funds cannot be used to pay for abortions except in cases of rape, incest, or to save the life of the woman.

If the U.S. Supreme Court follows through on overturning the landmark 1973 Roe v. Wade case that legalized abortion nationwide, it would immediately split the country into states with abortion access and those that outlaw it.

Some states had already been preparing for the potential that the high court could weaken or overturn Roe, but the bombshell leak of the draft opinion appeared to accelerate that drive Tuesday, setting the country on course for an even more jumbled landscape of abortion rights even before the court actually issues its ruling.

Almost immediately after Politico released the draft Monday night, Republicans who had fostered a decades-long push to end abortion rights cheered the prospect while Democrats vowed to fight the possible overturning of a constitutional right that has been in place for nearly a half-century.

In California, Democrats who wield control of the state Legislature and the governor’s office issued a joint statement late Monday announcing they would seek to amend the state’s constitution to enshrine abortion rights.

About half of U.S. states are already expected to ban abortion if Roe falls, according to the abortion-rights think tank Guttmacher Institute. Twenty-two states, largely in the South and Midwest, already have total or near-total bans on the books. Aside from Texas, all are now blocked in court because of Roe.

Thirteen states have so-called trigger laws that would immediately ban abortion if Roe is overturned and would presumably go into effect if the Supreme Court majority votes for the draft in late June or early July.

WASHINGTON — President Joe Biden says the “basic fairness and the stability of our law demand” that the U.S. Supreme Court not overturn the landmark 1973 Roe v. Wade case that legalized abortion nationwide.

In a statement Tuesday, Biden said he would work to codify the right to abortion into federal law. Politico released a draft opinion that suggested the court could be poised to overturn the landmark 1973 Roe v. Wade case.

A decision to overrule Roe would lead to abortion bans in roughly half the states and could have huge ramifications for this year’s elections.

It’s unclear if the draft represents the court’s final word on the matter — opinions often change in the drafting process.

The Supreme Court is known for keeping secrets. Year after year, in major case after major case, there’s little beyond what the justices say during oral arguments that suggests how they will rule.

That’s what makes the leak of an apparent draft of an opinion in a major abortion case a shock to court watchers.

The draft published by Politico says that a majority of the court is prepared to overrule the landmark 1973 decision in Roe v. Wade that legalized abortion nationwide.

There have been leaks before, but not of such magnitude. Only a handful of people have access to decisions before they’re published.

News that the U.S. Supreme Court is poised to overturn the landmark Roe v. Wade decision is reverberating in political battleground Michigan.

The state has a pre-Roe abortion ban that may take effect and is unlikely to be changed by the Republican-led Legislature.

Attention quickly is turning to the courts, where Democratic Gov. Gretchen Whitmer and Planned Parenthood have filed lawsuits seeking to invalidate the 1931 law.

The development also is putting a focus on the November election, when the governor and legislators are up for reelection and voters may decide whether to enshrine abortion rights in the Michigan Constitution.