2nd UPDATE, 1:58 PM: Going into sordid specifics, Amber Heard told the court in Johnny Depp’s $50 million defamation trial against her of how the former Fantastic Beasts actor sexually assaulted her in 2013.

“He’s grabbing my breast, he’s touching my thighs, he rips my underwear off and proceeds to do a cavity search …he shoves his fingers inside me,” a halting Heard told the court between tears after revealing how Depp pulled off her dress in anger.

The incident occurred after Depp accused another woman of flirting with the bisexual Heard at the Hicksville trailer park out in the California desert “I just stood there looking at the light …I didn’t say stop or anything,” the actress added in one of the most emotionally charged instances of the trial that started on April 11.

Having sued Heard in March 2019 over a late 2018 Washington Post op-ed that she wrote about being a survivor of domestic abuse and never mentions the actor by name, Depp has always denied he was violent to his then wife, nor did he ever sexually assault her. In fact, the past Oscar nominee insisted

Having started their part of the case earlier this week, the defense has been laying out the alleged physical, emotional, verbal and sexual abuse first via clinical and forensic psychologist Dr. Dawn Hughes and beginning today, Heard herself.

Peppered tactically with tales of hanging dogs out of moving cars, Keith Richards and Tom Waits verbal cameos, seemingly substantial cocaine use and jealous rages destroying trailers, Heard’s testimony in the closing hours of Wednesday’s session saw the actress exclaim “I pride myself on being tough.”

“I minimize it, “ she went on to say of the alleged violence in the relationship. However, in March of 2013 there were a number of incidents. After one occasion, Heard took a photo of large bruise on her upper arm. In another instance, she said about being hit in the face by Depp.

“My lip went into my teeth and it got a little blood on the wall,” Heard noted, adding her then boyfriend “wears a lot of rings.” Later, in explaining a July 2013 yacht ride with Depp and his then teenage kids, the actress said of her nearby downcast Rum Diary co-star, “there’s no off button with Johnny,”

“He could f*cking kill me, I’m an embarrassment,” an apparently shaken Heard said Depp allegedly told her as he weas pushing her up against a cabin wall in the boat he was about to sell to author J.K. Rowling. Followed by “barely coherent text messages,” Heard soon left the yacht with Depp’s daughter Lilly Rose shamed by the supposedly drunken actor’s accusations that she had humiliated him in front of his children.

Court ended a little early today, and Heard’s testimony will continue tomorrow. Traditionally dark on Fridays, the trial will pause all next week as Judge Penny Azcarte has a prior engagement to attend too. The proceedings will resume on May 16 with what is sure to be a brutal cross examination in the offering.

UPDATE, 12:45 PM: “I will never forget it, it changed my life,” Amber Heard told a Virginia courtroom today of the first time Johnny Depp allegedly hit her in the winter of 2011.

“I laughed, I thought he was joking and he slapped me across the face,” the often tearful actress said of the reaction from her then boyfriend as she inquired about a tattoo he had as the two were drinking together. “I laughed , because I didn’t know what else to do.”

According to Heard, the pounding it back Depp said, “You think it’s funny, bitch?” 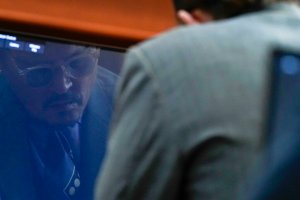 Just like in Heard’s earlier testimony on Wednesday, the former Pirates of the Caribbean star barely looked at his frequently crying ex-wife as she spoke about their life together. Instead Depp seemed to be fixated on something on the table in front of him.

“He slapped me again, it was clear it wasn’t a joke,” the Aquaman star added of the shock she felt at the time. “I didn’t move or freak out ..I just stared at him. And he slaps me one more time, hard.”

“I’m all of a sudden realizing that the worst thing that could happen to me happened,” Heard said in her testimony as the second witness for the defense.

Starting on April 11, the five week long trial stems from the $50 million defamation case Depp launched against his ex-wife in 2019 in reaction to a late 2018 Washington Post op-ed she penned on being a survivor of domestic violence.

“I didn’t want to leave him,” Heard admitted today of that first act of violence over a decade ago as she laid on the “dirty” carpet at Depp’s residence.

“I know you can’t come back from that, I’m not dumb,” the suited actress said under questioning Wednesday from her own lawyer.

Remarking on the “velvety love” the duo had when things were good, Heard earlier pulled back the curtain on the couple’s relationship turning sour in and around 2012 with an allegedly heavily drinking Depp calling her a “whore,” denigrating her fashion choices and throwing objects and punches close to her. In her testimony, Heard also the judge, jurors and others in the Fairfax County Courthouse of how she became adroit at reacting to Depp depending on if he was allegedly was on “speed,” “cocaine,” “Adderall” or any other of seemingly pantheon of substances.

Laying out more instances of alleged escalating abuse, “the rage this man had,” and Depp’s subsequent hyperbolic pledge like that he’d “rather cut my hand off than ever lay it on you,” Heard brought up a term the jury has heard before during his testimony and that of others. Heard said on one particular occasion in 2012 the sometimes “disappearing” Depp admitted to her knew he had a problem with booze and drugs. “I put that f*cker away, I killed that monster,” he told her, the latter term being frequently explained in prior testimony remarkably as referring to Depp’s sobriety, not his drinking and drugging.

“I wanted to believe him, so I stayed, Heard told the court, “I believed there was a line and he wouldn’t cross it again.”

PREVIOUSLY, 11:33 AM: “I am here because my ex-husband is suing me for an op-ed I wrote,” Amber Heard said today in Virginia within seconds of taking the witness stand in the trial of Johnny Depp’s $50 million defamation suit.

“I struggle to have the words to describe the words … this is horrible, sitting here for weeks and re-live everything,” the Aquaman star told her lead lawyer Elaine Bredehoft of the tales of violence and sexual assaults that have been brought up in the trial.

How To Watch The Johnny Depp-Amber Heard Trial; Heard Takes The Stand

“This is the most painful and difficult thing I’ve ever gone through, for sure,” Heard added as Judge Penny Azcarte, the jury and others looked on in the Fairfax County courtroom.

Notably, unlike his boisterous stint on the stand, Depp did not watch his ex-wife deliver her testimony. Instead, seated between two of his attorneys, the sunglasses-wearing actor leaned over the table and seemed to be distinctly avoiding eye-contact by scribbling. He has been seen in past days to be making drawings while others gave testimony, though it was hard to tell if that was what he was doing Wednesday.

Leaning in at the start to tell the jurors of her role as a mother now and her working-class childhood near Austin, Texas, Heard’s testimony comes more than three years after Depp sued her in March 2019 over a late-2018 Washington Post op-ed she wrote on being a survivor of domestic abuse. Although the piece in the Jeff Bezos-owned broadsheet never mentioned the past Oscar nominee by name, the already-litigious Depp insisted it was all about him, and that the article cost him big-bucks roles in Hollywood and essentially “devastated” his A-list career.

Johnny Depp: A Career In Photos From ‘Platoon’ to ‘Pirates’ And Beyond

Today Heard laid out her life up to coming to Hollywood in the first decade of the century.

Saying she “worked her butt off,” Heard noted how she at first had “small roles in big movies.” Under questioning from Bredehoft, the actress began to detail meeting Depp for the first time in 2009 at an audition for The Rum Diary. That “remarkable” conversation was filled with talks of “books and poetry” and “old blues,” the actress noted to the court, indicating that she clearly was charmed by Depp. Soon after that meeting, Depp called Heard to offer her the role in the filmed based on his late pal Hunter S. Thompson’s writing.

In her testimony, the actress spoke of making the movie in Puerto Rico and how a “flirtatious” vibe developed between the two — who both were in other relationships at the time. Calling it a “beautiful and strange time,” a sometime-tearful Heard also detailed a kiss they shared and how they first became involved in Los Angeles during the 2011 press tour for the film.

Clearly that beautiful time when the duo were in their “bubble,” as Heard called it, and hanging out on Depp’s private Bahamas island did not last.

To that, in a bit of a 180 from the couple’s contentious and restraining-order-defined 2016 divorce, Depp also declared in his 2019 lawsuit that it was he, not Heard, who was the victim of domestic abuse in the relationship. That, along with pounding the table figuratively on losing a potentially $22.5 million payout to be in the as-yet-unmade sixth Pirates of the Caribbean flick, has been the thrust of the case put forth by Depp’s legal crew since the Old Dominion-set and much-postponed trial started on April 11.

While Heard’s Bredehoft and Ben Rottenborn-led defense team have sought to puncture Depp’s version of events in the admittedly chaotic marriage with tales of drug and booze usage as well as violence, they have been on the backfoot narratively for most of the five-week-long trial so far.

Since suing Heard over the WaPo op-ed in 2019, Depp had a very unsuccessful attempt to go after Rupert Murdoch’s The Sun in the UK. Taking the tabloid to court in London for calling him a “wife-beater” in print, the ex-Pirates star lost that case in November 2020. While not a party in the case, Heard did testify.

As was made evident early in Heard’s testimony today, that legal action on the other side of the pond looms to some degree over this Stateside case. Additionally, after failing herself on numerous occasions to get the $50 million defamation matter dismissed or move to another jurisdiction, Heard countersued Depp for $100 million in summer 2020.

In that context and having been painted by the plaintiff’s side as an abuser suffering from borderline personality disorder both clinically and anecdotally, Heard initially was scheduled as the first defense witness. As Deadline reported exclusively this week, that strategy shifted after the defense team realized they need to redirect the jury’s perspective following the testimony last week by Depp-hired Dr. Shannon Curry damningly portrayed Heard as the perpetrator in the ex-couple’s difficulties. To that end, a clinical and forensic psychologist Dr. Dawn Hughes took the stand Tuesday in front of the judge and jury as the first defense witness.

Slicing at Curry’s diagnosis and approach, Hughes also delved into not only what she saw as Depp’s often-substance-fueled psychical, emotional and verbal violence but also repeated acts of sexual assault upon Heard.

Heard’s testimony is expected to last the rest of the week. The trial runs Mondays to Thursdays, with court closed on Fridays. The case will pause next week as Azcarte has a previously scheduled conference to attend. Playing to the calendar, Heard’s team likely will try to run down the clock to delay cross examination until after the break.